There, I said it: Many things about work just suck. While there’s also a lot being done to turn the suck into a delight – it’s what I’m working on myself – it doesn’t hurt to pause and ask ourselves: How did work become like this in the first place? When we compare the current state of our working life to the past we tend to walk away with the notion that „At least things are better now than they used to be“ because we no longer have to slave away in coal mines starting on our twelfth birthday.

However, there is obviously more to it as the nature of work evolves constantly, alongside humanity as a whole. To provide a useful context for comparisons, I personally identify four major stages in the last 120 years: 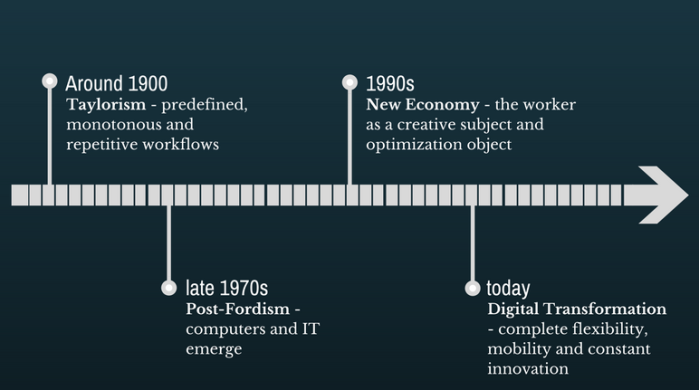 Elaborating on these stages in detail would fill several books of their own – in fact it already does. I could only do a poorer job of rewriting those and I don’t plan on doing that: I will use this series of articles only to provide a quick, simplified glimpse into the origin and establishment of the individual stages’ major principles that are still governing our working life of today.

The term „digital transformation“ is often interchanged with „digitization“ and „digitalization“ as if they were synonyms. This is not entirely correct as they describe different aspects of a world-changing phenomenon that we’re experiencing right now.

Wikipedia offers a good explanation, describing digitization as the conversion of analog attributes into digital values, digitalization as the process of induced change (manifesting itself in phenomena such as the Internet of Things, Big Data, Industry 4.0, Blockchain, cryptocurrencies etc.) and digital transformation as the resulting effect on society, culture, politics, economy and overall life.

For example a freelance tutor or consultant can digitize their services by creating a database of video lessons or podcasts and digitalize delivery of services by means of E-Commerce, such as subscription models for online/mobile streaming. In doing so, they contribute to digital transformation, co-creating the world of today:

A world in which the smallest businesses can cater to clients around the globe. A world in which more information is created every day than in the past 90 years and that allows us to carry all that information around in our pocket. A world that makes communication across oceans and mountains as simple as talking to your neighbor. A world that provides instant results and gratification to almost any everyday need and want. A world in which common man enjoys luxuries and abundances that kings and emperors couldn’t have fathomed. A world that offers endless flexibility, mobility and continuous innovation.

As a result we now live in a world of exponential change, with mankind’s knowledge growing in larger and larger leaps: Up until 1900 the knowledge held by humans supposedly doubled every century. By the end of WWII it took no more than 25 years to to double the entire human race’s knowledge. Thanks to the introduction of the internet that timespan was brought down to 1.5 years around the turn of the millennium; by the time I’m writing this we’re at a cycle time of under 13 months. IBM believes that once the Internet of Things gains real traction, knowledge will double every 12 hours.

But why should companies that don’t compete with Silicon Valley enterprises care; firms that don’t build search engines, mobile phones or social networks? Why would the Internet of Things affect operations of small and medium-sized enterprises (SMEs) focusing on entirely different markets and business models? Remember the pervasive implications of digital transformation: Digitization and digitalization may be driven by other actors and have little overlap with those not involved. But the resulting digital transformation, the effect, constitutes a change to the entire socio-economic system and the culture your business exists in:

Remember that computers changed everything. Remember the the internet did it and the mobile internet is doing it again right now. Those changes affect almost any and every business we know – regardless of whether they played a role in bringing about those changes (like Silicon Valley/tech companies) or were merely affected by them (like retailers). It won’t stop there – IoT, smart wearables/implants and more are just around the corner – and they’re only the small part of the future we can make out; there are tons more of unknowable unknowns. Societal and economical evolution won’t stop at this stage; it never will – and it would be a foolish gamble to bet on one’s own business not having to radically evolve beyond its status quo.

How We Feel The Results Today

Keeping up with the pace of digital transformation poses a huge challenge to yesterday’s businesses. While society and markets develop exponentially, individual organizations tend to evolve along a linear curve and the gap between the two grows larger at an accelerating speed. The resulting risk for older organizations – the risk of losing relevance as a solutions provider or as an employer – is still underestimated or ignored frequently, partially due to several cognitive biases of which I want to name a few:

What effects does all this have on the way we work? Paradoxically, while organizations struggle or hesitate to respond to digital transformation at scale and in a meaningful way, they still acknowledge it to be true – and demand their employees keep up with the times.
The modern worker is supposed to embrace uncertainty in the workplace and respond to it with absolute flexibility, mobility and constant innovation. However, these demands are made without making the necessary changes to the system within which the employee is capable of acting:

Digital transformation means a violent clash of the realities of our time with managerial truths of the last decade. It comes at a speed and with a force that yesterday’s organizations simply are not designed to handle or even adapt to – so they don’t, instead making their employees responsible for bridging the growing gap between company and markets while absolving the organizational structures and processes of any need for change.

In doing so, these organizations accomplish the feat of acknowledging market realities in one moment and acting as if they don’t exist in the context of the company’s inner workings in the next. It is a futile attempt to achieve new and innovative outcomes by hanging on to old and outdated solutions as well as applying a little extra grind to the workforce: Because it’s individual workers and teams who are being held accountable for the declining performance of an atavistic organization whose structure and processes they’re unable to affect.

This article is the fourth in a series of four about how the history of work relates to today’s work life realities. If you’d like to receive a notification when new articles on other subjects are published you can submit your email address here.

Other articles in this series:

2 thoughts on “A Brief History Of Why Work Sucks – Part 4 of 4: Digital Transformation”

Your thoughts on this? Cancel reply